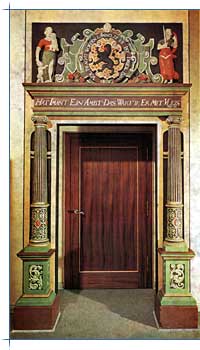 As independent corporations, most German cities maintain their own archives in which they preserve the historical tradition of their own city history.

City archives usually limit their archiving function to their immediate city area, including the incorporated villages and towns. They try to process this strictly outlined geographical jurisdiction as comprehensively as possible. I.e., city archives almost always have the claim to take over more than just the closed files of their city administration and collect testimonies of all kinds on their own initiative. They do this in order to document the urban life of their citizens in its entire breadth, both in history and in the present. Many city archives therefore have extensive collections of photos, programmes, posters, newspapers and much more.

It is part of a living society to keep the memory of its roots present. The cities as places of action bear the responsibility for this. By preserving and communicating the intellectual heritage, which presents itself as archival material, the city archives make an essential contribution to understanding the past and present, they have an identity-building effect for the city and its citizens.